This is the JNIOR Knowledge-base.  Here you will find a collection of articles that will help you learn or trouble shoot the JNIOR.

If you find there is information we should add then please get in touch with us. 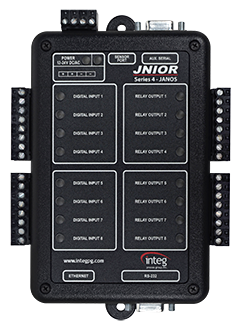 JNIOR, a Network I/O Resource utilizing the JAVA™ platform, is a cost effective automation controller that communicates over a network using TCP/IP via an Ethernet Port or via its serial port. The JNIOR is a general-purpose automation controller and I/O device that is easily configurable for controlling and monitoring your equipment or process via the built-in web pages, by enabling the built-in software applications, interaction with an application running on another computer, or by adding your own applications.

Currently there are 4 different Models of the Series 4 JNIOR, each very similar to one another with a few differences.

The JNIOR uses a 2-piece terminal connector system for all power and I/O wiring connections allowing for easy installation and/or removal of the JNIOR.  Additional installation information and drawings are provided on our website.

The JNIOR can be powered with 12 to 24 volts AC or DC. An optional, wall transformer (AC power converter) for North American outlets is available from INTEG that can be used for converting 120/240 VAC to 12 VDC @ 1 amp. International models are also available as Euro and UK plugs.

The Power Connector is located along the upper left edge of the JNIOR. Note that this is a 4-pin connector. If numbered from one (1) through four (4) from left to right power is always connected to positions 2 and 3 (middle two connectors). The polarity is irrelevant although it is recommended that the positive (+) lead be connected to position 2.

The left two positions (1 & 2) are internally connected together, as are the right two positions (3 & 4). This is to facilitate the interconnection of the supplied power to other devices and circuits such as input or output devices. If you power the I/O circuits with your JNIOR power supply, please make sure the power supply is sized appropriately.

WARNING: Do not connect the transformer leads both to Positions 1 & 2 or both to positions 3 & 4. This will short the transformer and possibly damage it and/or the JNIOR. Always use a fused/protected power source.

When a proper power source is connected and turned on the leftmost LED adjacent to the power connector will glow BLUE continuously. The LED to the right may glow ORANGE for several seconds. This orange STATUS LED remains on through most of the JNIOR boot sequence. Later it will flash whenever an external connection is made to the JNIOR via the Ethernet port.

The JNIOR is equipped with Relay Outputs with most of them being a Form A SPST relay (1 Normally Open Contact) and two of them being a Form C SPST relay (1 Normally Open Contact and 1 Normally Closed Contact – jumper selectable as to which one is available on the JNIOR terminals by removing the lid and changing the jumper setting. Normally Open is the default.) Each relay output is independent and isolated from the other relay output. Each relay contact rating is 1A @ 24VDC and the voltage source must be in the range of 5 – 30V AC or DC. A typical connection would be configured as follows:

Starting with JANOS 2.0, the JNIOR is shipped with DHCP enabled for dynamic setting of the JNIOR IP address by a network server. More information is here on finding your JNIOR’s IP address.

If DHCP does not work on your network, then there are two ways to configure your JNIOR IP settings:

The JNIOR Series 4 contains the JNIOR web page which is a web page used for a variety of functions including monitoring and manually controlling the I/O, changing various configuration items, opening a Telnet/Console session and several other functions. The JNIOR web page works with Microsoft Internet Explorer, Google Chrome, Fire Fox and other browsers.

PLEASE NOTE: The dynamic web page requires a ‘modern web browser’ which is defined as Internet Explorer 10 or greater, Google Chrome or Firefox.

After the JNIOR web page is loaded, the user is asked to login with a valid username and password. You can use the default username (jnior) and default password (jnior).

The JNIOR web page will be launched in your browser as shown below.