The Series 3 JNIOR is no longer in production. The 310, 312 and 314 have some time ago been replaced by the much more capable Series 4 models 410, 412 and 414. All versions of JNIOR utilize a 3V Lithium cell as battery backup for the time clock and the RAM based portion of the file system. While the Series 4 employ standard coin cells (CR2016 or CR2032) that can be easily replaced with batteries available from your local convenience store, the Series 3 batteries are soldered in place. 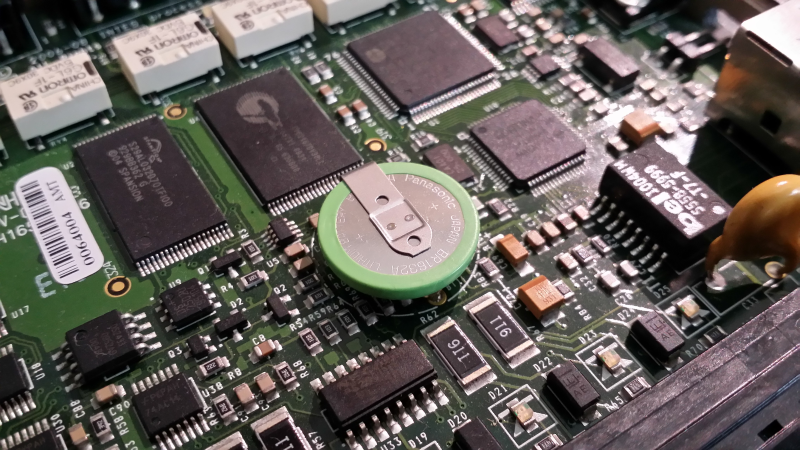 The one shown here is dead. So DEAD in fact that you can barely detect the 0.008 volts that remain.

These batteries were expected to last 10 years in the typical JNIOR application where the unit remains powered 24/7 or nearly so. In applications where the JNIOR is powered less than 8 hours per day these batteries need to be replaced after about 6 years of service.

Note that the battery IS NOT required for product operation. In situations where the time clock needs to be accurate (scheduling) then units should be updating their clocks from a separate time server (NTP) through the network. The clock will be set after booting. The RAM based portion of the file system retains log files which are normally only necessary for debugging. Those files need not be retained through power loss.

INTEG no longer has inventory for these batteries. It is not cost effective for us to replace them.

If you feel confident using a soldering iron, these batteries can be replaced.

The original battery was Panasonic BR1632A/HAN and is currently not in stock at DigiKey. However, you can use the Panasonic BR-1632/HFN battery and at this writing there appears to be sufficient stock. These are less than $2 in quantities of a few.
https://www.digikey.com/products/en?keywords=P299-ND

You can however use any 3V battery source. You might add wires to accept wired batteries. You might even find a coin cell holder to fit. The pin spacing is 15.2mm. But since you will likely not need to replace the battery or another half dozen years you might not get too fancy.

Desoldering is tricky. First of all the solder has a high melting temperature due to its RoHS nature. Secondly the (-) GND terminal connects to the ground plane which represents a fair heat sink. It will take time and a lot of heat to loosen the negative battery terminal. Replacement is simpler if you first carefully cut the existing battery off of the board. The positive lead can be removed easily with the simplest desoldering equipment. The negative lead will take some effort. I end up using a hot air soldering iron in combination with a desoldering station. Be patient. It can be done.

Even though an old battery may be dead it should be disposed of properly. Most instructions for Lithium cell displosal are referring to serious batteries like that for your laptop computer. Those may require a more complicated procedure. If necessary in this case you can simply wrap the battery with tape sufficient to prevent the accidental shorting of the contacts and toss it out with your trash.

There is one additional note of caution. You will note that there are surface mount components under the battery itself and near the terminals. Care must be taken to not disturb those components. Don’t damage them if you go to cut the battery off of the board. Watch that you don’t apply so much heat to the terminals that you loosen the surface mount components. Apply heat only to the rear of the board.

If you damage those circuits you will impact product operation.